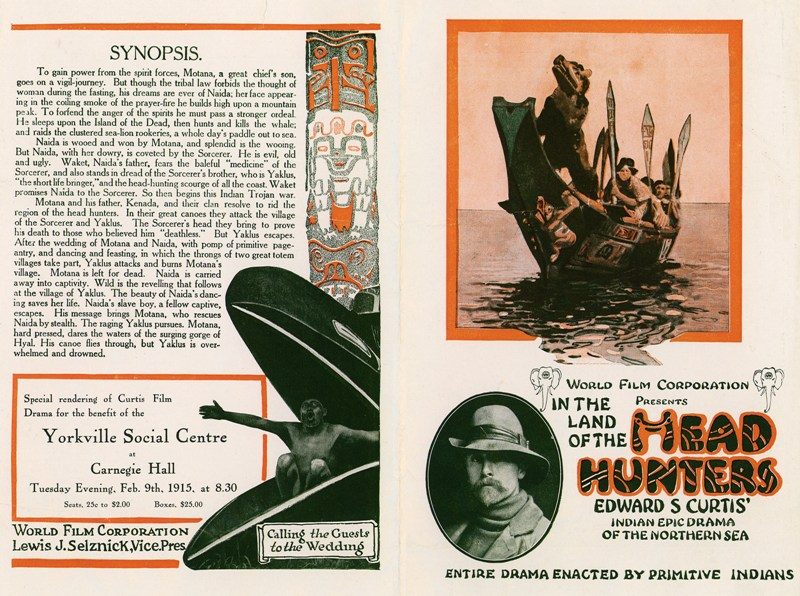 In the Land of the Head Hunters opened simultaneously at the Casino Theatre in New York and the Moore Theatre in Seattle on December 7, 1914 (Curtis was present in New York). Seattle newspapers spoke of subsequent San Francisco and Los Angeles engagements, though no evidence of these has yet surfaced. Despite gala events and positive reviews, the film’s reception clearly did not live up to Curtis’s expectations.

It has long been thought that after running twice daily at each location for a week, the film then disappeared from sight. We now know that its failure was not quite so immediate. The World Film Corporation distributed it throughout 1915 and 1916. Newspaper searches reveal that, at the very least, it showed again in New York, in Lima, Ohio; Lowell, Massachusetts; Oakland, California; Placerville, California; Fairbanks, Alaska; and Eau Claire, Wisconsin. World Film Corporation receipts from the first year of distribution, up to and including December 25, 1915, have Head Hunters making a paltry $3,269.18, near the bottom of their list.  Disappointed in its box office failure, Curtis abandoned the film as a fund-raising enterprise.

1924: The American Museum of Natural History

In 1923, when Curtis was in Los Angeles working for Cecile B. DeMille on The Ten Commandments, P. E. Goddard of the American Museum of Natural History began a correspondence with him concerning the purchase of In the Land of the Head Hunters, which Goddard acknowledged as having “a good deal of ethnological interest” (August 17, 1923). These inquiries led to the sale of Curtis’s sole remaining negative copy of the film (which he edited down according to the museum’s wishes), as well as his relinquishing of the copyright to it, for the sum of $1,000. In a letter dated October 16, 1924, Curtis writes of having shipped the six reels of film and signed over the rights to the museum. Though the correspondence remains, little is known of what happened to the film itself. Because of the highly flammable character of early 35mm nitrate film, it may have been destroyed for safety reasons. The museum has no current record of it.

1947: Hugo Zeiter and The Field Museum 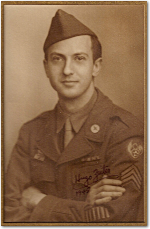 The next time the film surfaced was in 1947, when a 35mm nitrate copy was donated to Chicago’s Field Museum of Natural History by an eccentric collector from Danville, Illinois, named Hugo Zeiter. By then, it had been largely forgotten.

Zeiter, who passed away in December 2007 at the age of ninety-two, had three great loves: Indians, circuses, and old films. When he died, he still had a collection of over 900 old movies—even after having given away most of his valuable 35mm nitrate films in the 1940s. He recalled having received his copy of In the Land of the Head Hunters from a friend who used to pull film out of an old dumpster outside a movie house in Chicago. Zeiter did not, at the time, realize that his film was actually Curtis’s In the Land of the Head Hunters. In his correspondence with the Field, he referred to the work as “The Vigil of Motana,” the title on the cue card from the opening frame of the first extant reel.

By the time it got to Zeiter, only four of the original six reels remained. He sent these four to the Field via Railway Express on March 5, 1947, asking in return only for a 16mm copy, if one were made. In the correspondence, mention is made of the film’s extensive coloring, which greatly interested the film buff Zeiter. By contrast, the Field’s interest was ethnographic. Its anthropological staff quickly determined that portions of the film had “great merit as scientific record,” for its representation of “characters, costumes, utensils and weapons, houses and scenes are authentic, and could no longer be duplicated” (Miller to Gregg, March 18, 1947). Clifford Gregg, Director of the Field, wrote personally to Zeiter, explaining that “[q]ualified anthropologists of the museum staff viewed the pictures [stills taken from the film] and are of the opinion that portions of the sequence are irreplaceable photographic records of sufficient importance to warrant making a copy.” But at the same time, he noted that the friable nature of the 35mm nitrate made it “best to dispose of the nitrate base print immediately instead of wasting time in a fruitless effort to save it” (Gregg to Zeiter, March 20, 1947). The transfer copy they planned to make of the film would no longer have the “dyed parts” that interested Zeiter.

At the end of March, Zeiter was leaving for Okinawa, where he was to work for the Civil Service, Department of the Army. He wrote to the Field asking if they could keep the 35mm nitrate print in storage instead of destroying it, and Gregg assured him that it would be preserved. One record indicates that the nitrate print once caught fire while being projected; perhaps for this reason, it was eventually destroyed.

The version of Curtis’s motion picture familiar to viewers today is called In the Land of the War Canoes. It was restored by art historian Bill Holm and museum anthropologist George Quimby in the late 1960s. Quimby had been a curator at The Field Museum in the 1940s, when Zeiter donated his copy to the museum. He brought a copy of the Field’s 16mm duplicate with him when he moved to the Burke Museum at the University of Washington in 1965, and he and Holm began setting the grounds for restoration work in the summer of 1967.

The restoration was undertaken with extensive support from the Kwakwaka’wakw, with whom Holm had been working. It was released in 1973 through the University of Washington Press. Holm and Quimby published a seminal volume describing the film and their project, Edward S. Curtis in the Land of the War Canoes: A Pioneer Cinematographer in the Pacific Northwest (University of Washington Press, 1980). Around 1990, War Canoes was picked up by Milestone Film, its current distributor (since 2004, it has received additional distribution by the Royal Anthropological Institute in the UK and Europe).

As Holm and Quimby make clear in their volume, a number of significant changes were made to the film in the process of their restoration. Foremost among these were the change in title, the replacement of the original silent film intertitles (many of which contained character dialogue), the rearrangement of the opening sequence and some subsequent scenes, and—in the absence of the original musical score—the addition of a soundtrack of sound effects and Kwak’wala-language dialogue and songs recorded by Kwakwaka’wakw community members. In an innovative move, the newly recorded soundtrack literally gave “voice” back to the Kwakwaka’wakw of the time, who imagined the dialogue of their silent actor/ancestors (much like the actors had imagined the past practices of theirs). These changes were undertaken to make the film less objectionable to modern viewers and more narratively coherent—recall, the film at that point was missing two of the original six reels. But they also had the effect of shifting the focus of the film from Curtis’s melodramatic sensationalism to the ethnographic significance of Kwakwaka’wakw traditions—from “head hunting” to “war canoes.” Playing up its status as a visual record of (re-enacted) nineteenth-century cultural forms, and building on the interest declared by past museum curators, Holm and Quimby suggested that Curtis’s was the first feature length documentary film. For film historians, however, such changes present obvious problems.

Even with these limitations, the film was still recognized as a landmark of early cinema. In 1999, it was selected for preservation in the National Film Registry by the Library of Congress. http://www.loc.gov/programs/static/national-film-preservation-board/documents/land_head_hunters.pdf