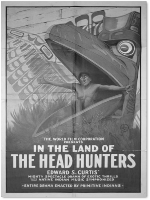 Original advertising for the film describes it as a “drama of primitive life on the shores of the North Pacific.” The action takes place just before the time of the “first exploration” of the Coast; an early scenario featured Vancouver’s ship encountering the Indians, though that scene did not make it into the final film. Nowhere in the film itself or in its advertising materials were the Kwakwaka’wakw identified by name or the location specified as Canada; the film is presented as depicting only a generalized tribe from the Pacific Coast. 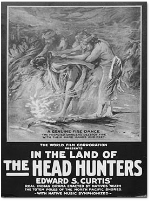 The story overlays three plot elements onto each other: a melodramatic love triangle; an equally melodramatic series of aboriginal battles (from which the “Head Hunting” title is drawn); and a sampling of Kwakwaka’wakw ceremonial performances. The hero, Motana, falls in love with “the maid of his dreams,” Naida, while on a kind of vision quest that entails praying, dancing, and hunting. Unfortunately for him, Naida is betrothed to an evil sorcerer. After completing his quest, Motana embarks on a battle to win Naida by killing the sorcerer, and the two are married with great ceremony. As might be expected, the sorcerer’s equally unsavory brother, Yaklus, is outraged. He takes his revenge by ransacking Motana’s village, killing the hero’s father (Kenada), and stealing Naida for himself. Strangely, the most magnificent Kwakwaka’wakw dance ceremonies in the film come in celebration of Yaklus’s success in war. But then Motana and his crew stage a dramatic rescue of Naida from the bedside of Yaklus. A remarkable canoe chase ensues, at the end of which the sorcerer’s brother meets his doom in “the deadly gorge of Hyal.” Yaklus’s canoe is capsized in the waves, his men perish, and his dead body washes up against the rocks.